A theme Wed Anderson might have been working with when he fashioned Grand Budapest Hotel might have been: “They just don’t make them like this anymore.”  In our new era of computerized storytelling, we have lost a lyricism, a respect for the pregnant pause, the need to commemorate personal events with words and a little ritual.

Scouting this picture must have been an adventure in and of itself.  Shot in various locations in Germany, the set designs were so fully realized that you felt as though though you were actually occupying those old world rooms.  Anderson is deft with his paintbrush, moving you back and forth through time using color.  The reverence for this magisterial landscape and architecture is palpable, teetering on the sentimental line without ever crossing it. 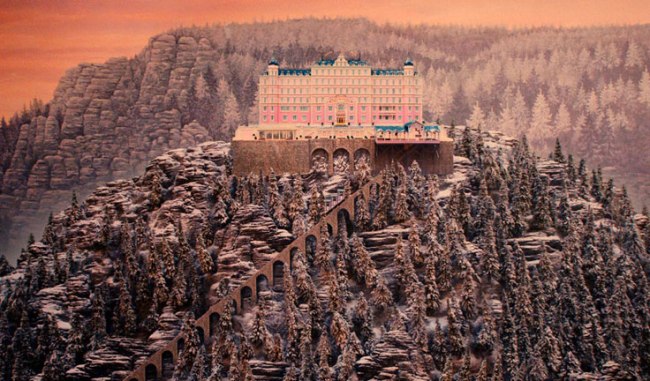 Ralph Fiennes, playing M. Gustave, the gallant but opportunistic butler of the hotel, puts in a rare performance with spiffy comic timing we never get to see from someone so traditionally serious.  It’s as though he is also pining for the days when he could make an audience laugh.

And while it can be annoying when a writer/director insists on using the same actors repeatedly, in this case it’s like watching a theatre troupe come to town; all these actors are like your buddies and even if they only make quick little cameos, you are so happy to see them.  He throws in some entirely startling new-but-famous faces for mere seconds which makes you think the production must have been so much fun that everyone wanted to get in on it, even if they only had one, short scene.

There is something so wonderful about F Murray Abraham’s elegant speech.  He is an undervalued gem.  The script is lively and vivid, giving the actors plenty of room to thoughtfully invest in the words.  But Anderson is too self aware to give his characters great silioquys; he almost always yanks them from their eloquent emoting as a way of poking fun at himself.  He seems to be addressing the dying art of filmmaking and theatre, even as he incorporates new techniques, he is bowing low to the bygone era of set building and the melodramatic posturing of silent film.

A bookseller once told me that a good story should have a little bit of everything: a little romance, a little murder, a little laugh, a few tears or sighs and of course, a good chase. To tell and retell a story is to relegate it to the past.  Remembering is at once reliving the event and heaving a sigh of relief that it is over.  I envy this filmmaking team’s memories in creating such a ripsnorting romp.