Note:  I submitted this article to the Sacramento Bee but they did not pick it up.  So I’m posting it here as is.  I also include the full interview with #AlexGrey and #AllysonGrey.

Imagine the world’s wisdom traditions combined and compressed into anatomical drawings of the body. Visionary artist and spiritual icon Alex Grey has spent more than 30 years merging esoteric religion and biology though his art.  His figures are like human light bulbs lit so brightly from within that their skin is transparent. Grey will be signing his latest book Net of Being for eager fans at Art Discovered in downtown Grass Valley on April 10th.

His appearance in a small town at a fledgling gallery may come as a surprise, but it is entirely consistent with his ideals about creative life. His advice for artists trying to make a living in a small town: “Stay as close as you can to what you love. The most important thing for an artist is to find their subject, the thing they make art about, that keeps them hooked on creation…be a strong artist community and make offerings to the greater community and they will support you.”

Grey was born and raised in Ohio where in the mid 70’s he attended #ColumbusCollegeofArtandDesign on a full scholarship but dropped out before graduating.  His work as a research technologist at #HarvardMedicalSchool and as a medical illustrator gave him unique insight into the form and function of the human body.  Combining this understanding with hallucinogenic experimentation and rigorous study of world religions, Grey embarked on a lifelong exploration of human consciousness.  He has taught at New York University, Naropa Institute and Omega Institute, among others.

Many in the 60’s and 70’s had an awakening but few were able to define it, sustain and articulate it with Grey’s diligence. He peels back the material and energetic layers of the body to reveal the miraculous in the mundane: the phenomenon of smelling a flower or making eye contact with a loved one.  For Grey, the work is a spiritual quest to unify, to lift the delusional boundaries that separate human from human.

His images are ubiquitous, as Net of Being attests.  Tattoos, posters, album covers, clothing, all brandish Grey’s signature third eye.  While this propagation of image might make some artists queasy, Grey seems delighted that these ideas have gained such traction.

“When visions come, an artist may feel a moral obligation to share the iconography that has been personally meaningful, even sacred to them. When an artifact transmits this mystic truth, the viewer recognizes and identifies with it as an icon.”  He often refers to this principle as a #sacredmirror, a seed planted in the mind of the viewer meant to inspire enlightenment.  Grey and his wife, Allyson, have worked on an ambitious project in Wappinger, New York called the #ChapelofSacredMirrors, a temple honoring the world’s wisdom traditions and indeed, inventing a new, art-based religion.

It is brave in this cynical era to advocate universal love and world peace. “Art is the opposite of war,” Grey writes in his book.  In an interview, the Grey’s explained further: “In the future we propose everyone is an artist of their life: a creative node in a unified earth citizens brigade that saves the precious life web, sharing our gifts and emphasizing what unites people rather than what divides.”  When Grey makes bold proclamations like this, people listen and believe.  It may be because he is so studied and draws on such a wide range of sources, or because he has been so consistent in his message and in his life.  Or it may be simply because his images are breathtaking.  Alex Grey’s vision and voice will continue to energize people.  Awe at existence does not go out of style. 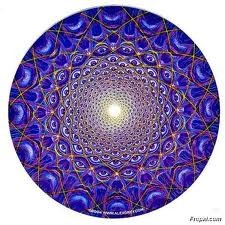 Below is an email interview exchange I had with the Grey’s in its entirety:

I was noting in Net of Being your delight at the propagation of your images in the counterculture, i.e., tattoos and merchandise.  Can you tell me about the relationship between art making and commerce?  How do you, as an artist navigate that tension?
When visions come, an artist may feel a moral obligation to share the iconography that has been personally meaningful, even sacred to them. When an artifact transmits this mystic truth, the viewer recognizes and identifies with it as an icon. An effective icon is a sacred mirror that provides a glimpse of the viewers innermost being and imaginal experiences. When an artist gains access to the divine imagination and creates an effective icon representing that experience, the consciousness of a viewer can be transformed to a higher spiritual orientation by contemplating that art. This is the Dharmic principle of Liberation Through Seeing — to plant a seed of enlightened vision in the mindstream of the viewer.  The Orthodox Christians call it Theosis, coming closer to God by meditating on icons.
Right livelihood, one of the Eight-Fold Noble Paths of Buddhism, means doing a job for which you are not ashamed, a job that supports yourself and society.  People have asked for reproductions of my artwork so we make them available.  All proceeds from all sales of merchandise go toward building Entheon, a sanctuary of visionary art at CoSM, Chapel of Sacred Mirrors.  Everybody that buys stuff is a builder with us.  Buy the poster, get the world view. Get the tattoo, embody the message.  We don’t think of it as counterculture, but more as visionary and underground culture, like the mycelial web of creative intelligence alive at music festivals throughout the world.
In a small town with a very young art scene, making art for a living is like winning the lottery.  Do you have any advice for our local artists in finding a balance between art and making a living?
Stay as close as you can to what you love. The most important thing for an artist is to find their subject, the thing they make art about, that keeps them hooked on creation.  Then it doesn’t particularly matter whether you sell it or not, you are doing what needs to be done on a Soul level.  Solitude and deep reflection for years is necessary sometimes.  This is why we think of art as a spiritual calling, you don’t really get into it for the money.
Make art events happen and attend those organized by others. Be a strong artist community and make offerings to the greater community and they will support you.
Use the internet to make more friends. In any business or endeavor, make more friends and share your most inspiring work. Make art everyday if you want to make a living at it. Keep a sketch book. Read Think and Grow Rich. Zena summarized How to Be a Great Artist by creating a small book when she was five. “Do Your Best. Be Yourself. Never Give Up.” If your art is your uncompromising best work, if the work represents you authentically and without pretense and you practice art-making daily for a lifetime, continually sharing that artwork fully and inspiringly, your work will touch others and support you no matter where you live.
You and Allyson have traveled all over the world.  Can you tell me about other cultural approaches to art making that have made an impression on you?
We have been particularly drawn to the world’s holy places because we are called to build one. A sacred site puts a philosophical framework around a sacred artifact. A gallery offers a sales environment. Art in a museum offers an anthropological, archeological context, classifies and educates, giving historical perspective. A site created to honor the divine provides a protective boundary around mystic art that represents the core teaching of the faith of that sacred place.
Excellence exists in every art form in every corner of the planet. Worldwide, we meet visionary artists depicting their experiences in a new kind of sacred art that portrays their personal visions of the divine.
In the book you say: “art is the opposite of war.”  I think it’s safe to say that most of us feel powerless in the face of war and that this modern era presents an increasingly efficient, global war machine. As a result humanity feels more fragmented and separate. What does the future of humanity look like to you?
In the future we propose everyone is an artist of their life, a creative node in a unified earth citizens brigade that saves the precious life web, share our gifts and emphasize what unites people rather than what divides. Finding unity and discovering the gift of life, no matter what the current conditions, is a sacred path.